AN URGENT MESSAGE FROM THE EL PASO COUNTY GOP

(Find background information about this issue at The El Paso Fiasco.🔗)

(Find background information about this issue at THE EL PASO FIASCO.🔗)

Actually, this is probably not the last egregious overstep🔗 of Kristi Burton Brown's authority as Chairman of the Colorado Republican Committee.  After all, we do have nearly a month to go before her term is up.  We know to expect more shenanigans at the SCC meeting and leading up to it.  Knowing how she plays will help us keep her and The Establishment in check until she's replaced on March 11.

For some background information on the "ongoing internal conflict in El Paso County," please see The El Paso Fiasco.🔗

On January 16, the chair of the Colorado GOP Central Committee (CC) issued a highly unusual call🔗 for a January 31 special meeting of the CC to consider the following agenda:

Thank you for representing Colorado to the RNC to vote🔗 for the chairman, co-chairman, and other officers of the RNC at the end of January, 2023.

I implore you to vote for Mike Lindell for chairman.  He has proven himself to be a believer in the America First Agenda, which is the essence of platform of the Republican Party🔗 – as is supporting President Trump in the upcoming election, which he does.

Mike Lindell has proven that he can run several large enterprises simultaneously by facilitating the self-sufficiency of each, which is exactly the structure of the Republican Party, and frankly of the Republic.

Mike Lindell has proven that he can sell things he believes in – who hasn’t heard of My Pillow?  One of the jobs of the chairman is to promote the values and principles of the Republican Party and Mike Lindell has created an entire network🔗 with 3 channels streaming American values 24/7.

Mike Lindell has made his fortune by selling things people want.  He understands that people want good government and would donate to a well-run Republican Party because they’re getting something of value for their money.

Mike Lindell understands that without honest elections, we do not have a Republic – we have totalitarianism with frequent election shows.  He has spent millions of his own money on litigation and investigating corruption in elections.

The current Chairman has overseen too many losses to be considered a serious candidate for reelection.

The other female candidate told Dave Rubin🔗 that the Democrats win by putting money into “far right-wing primary election candidates in moderate districts” where they “can’t win.”  To me, “far-right” candidates are those who stand firm in their faith and on the principles of the Republican party. A "Republican" who can't make a winner out of a true Republican candidate shouldn't be party chairman.  A “Republican” who believes that a candidate who would legislate with godly and righteous principles “can’t win,” is a Republican In Name Only and should not head the party.

Colorado’s corrupt Democrat government is proof that where Republicans are ashamed of the principles and values they are supposed to be promoting, evil abounds.

Help save the American Republic.  Vote to put Mike Lindell at the top of the Republican Party. 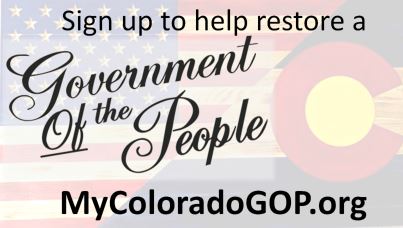